Supercomplex of photosystem and antenna —organization and function—

From environmental input, To physiological output

I’m interested in a supermolecular organization of photosystem complexes. My lovely target organisms are cyanobacteria. They perform oxygen-evolving photosynthesis using two photosystems, photosystem I and photosystem II. The name of cyanobacteria comes from their “blue-green” color. But cyanobacteria are more colorful, not only the blue-green but also red, purple, pink and more. The color palette is thanks to their major antenna protein complex “phycobilisome”. Phycobilisome is composed of many colorful chromophore-binding proteins, phycobiliproteins, and their associated linker proteins. The typical phycobilisome consists of several peripheral rods radially projected from a core. A rod-core linker protein CpcG anchors the rod to the core. 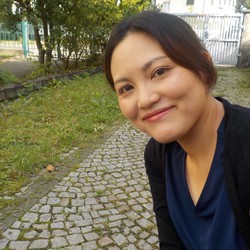 Mai Watanabe is a post-doc of JSPS Overseas RESTART Research Fellowship in the lab of Prof. Annegret Wilde at Freiburg University. She is interested in How environmental signals regulate the organization of the photosystem and antenna complexes.